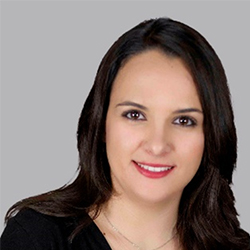 Dr. Nadia Kornioti is a qualified Advocate in the Republic of Cyprus, holding an LLB from the University of Leicester, UK, and an LLM in Public International Law from University College London, UK. In March 2022 she also completed her doctoral degree at the University of Central Lancashire (UCLan), UK based at the Cyprus Campus of the university, where she has been an Associate Lecturer since September 2018.

Nadia has decade-long experience with a number of international, regional and Cypriot institutions, including all major EU institutions, the EU Fundamental Rights Agency (FRA) and the International Red Cross/Red Crescent Movement. Working areas included Migration, Asylum, Fundamental Rights, Equality and Non-Discrimination, Memory, Transitional Justice and Peace Education. Since November 2017 she was also appointed a member to the International Law Association’s (ILA) Committee on ‘Human Rights in Time of Emergency’, and since May 2018 she has been an alumna of the Robert Bosch Foundation, under the Foundation’s Peace, Justice and Remembrance programme.

She became a member of ICLAIM in 2018, when she was invited to act as a reviewer for the newly-launched ‘Handbook on Social Mediation’ published in May that year. Since then, she has been a core member of the Social Mediation team, conducting training, and contributing to the development of the project. Today she is also one of the coordinators of the Social Mediators’ Network, established in September 2020. Building on her experience, Nadia’s research areas of interest include general Public International Law, with a focus on International Humanitarian Law and International Human Rights Law, Refugee and Migration Law, Legal History and Theory, Cyprus Constitutional and Administrative Law, and Transitional Justice and Memory, at Law’s intersection with Politics, the Social Sciences and the Humanities. She has taught, published and/or presented on the above topics.